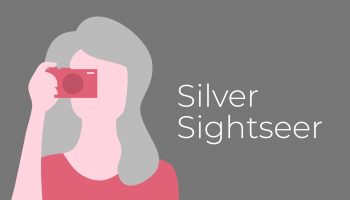 Love to read? See how that can make a difference here ! 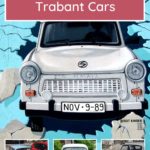 Like the Ford Model T or the Volkswagen Beetle, the Trabant (or Trabi) was the communist bloc’s version of a “people’s car.” Although it aspired to be affordable and practical for the masses to own, the Trabant often missed the mark. But when the Berlin Wall fell on November 9, 1989, the boxy, diminutive car instantly became the symbol of the end of the communist bloc as East Germans piled into their Trabis and fled to the west. Here are other fun facts about Trabants.

Built in East Germany between 1957 and 1990, the Trabant looks like a real-life version of the cartoonish cars I scratch out during a spirited game of Pictionary. At about 11 feet long and under five feet wide, this family car:

In part due to its starring role on the cover of U2’s Achtung Baby in 1991, the Trabant represents the fall of the Berlin Wall like no other icon. Of the more than three million produced during the Cold War, about 58,000 are still registered, the majority of those on the roads in Eastern Europe. And one of the best tours in Berlin is via Trabi! 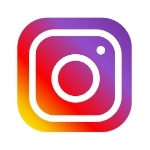 Do You Love Trabants?

To help offset the costs of running SilverSightseer.com, you’ll find affiliate links lightly sprinkled throughout the site. If you choose to make a purchase via one of these links, there’s no additional cost to you, but I’ll earn a teeny tiny commission. You can read all of the legal blah blah blah (as my little niece says) on the full disclosure page.

1. Trabant Cars Were Positioned as an East German Car “for the People”

Like the Ford Model T in the United States in the 1910s and the VW Beetle of post-war West Germany, the Trabi was East Germany’s version of a “people’s car.” It was designed to be affordable and easy for anyone to maintain with a few basic tools.

Sage Advice: You may also see Trabi spelled Trabbi (with a double “b”), especially in Germany.

2. The Trabant’s Name was Inspired by the Space Race

The German word trabant means “companion” or “fellow traveler” and was inspired by Sputnik, the Soviet satellite that, during the same year that the first Trabi was sold, was the first to successfully orbit the earth.

While the vehicle’s name may have been inspired by the Space Race, there was no speed involved in acquiring one. In East Berlin, many families spent more than ten years on a waiting list to purchase a Trabi car. Outside of that urban area, East Germans might wait as long as 18 years for the same opportunity. (That kinda makes the cable guy seem punctual, doesn’t it?)

In most markets around the world, an automobile starts losing value the second you drive it off the lot. But the opposite was true for the Trabi cars. A brand new Trabant sold for 8,500 to 12,500 East German marks. Both East- and West German marks are obsolete (the now-unified Germany uses the Euro as its currency), but we can roughly convert the price of a Cold War-era Trabant to about $9,800 to $14,500 present-day dollars. While that may seem like a cheap vehicle, the average East German worker earned 13,680 East German marks annually, making a new Trabi the equivalent of a year’s wages.

And used Trabis were even more expensive, typically selling for 4,000 East German marks more than the cost of a new one. Why the price difference? East Germans were willing to pay more for a used vehicle since it was available immediately (and not in a decade). Can you imagine paying 30 to 50 percent more than a new model to acquire a 2013 Honda Civic?

5. The Trabi is Not a Performance Vehicle (And You Don't Want to Know About its Emissions Standards)

A Trabant needs more than 20 seconds to go from 0 to 60 miles per hour. (In the United States, the average car can reach that speed in about eight seconds.) And it tops out at a maximum speed of 100 kilometers per hour (about 62 miles per hour). So I guess it’s just as well that the autobahns in East Germany were largely neglected after World War II!

When the Wall fell in late 1989, East Germans packed as much as they could into their slow-moving Trabis and headed west. But because Trabis spewed nine times the hydrocarbons and five times the carbon monoxides of the average European car, the vehicles didn’t meet West German emissions standards. This meant that most Trabant drivers had to get special permission to cross the border, and West Germans often joked that Trabants “smoked like an Iraqi oil fire.”

6. The Trabant Outer Body Isn't Made of Steel or Iron

While it has a steel frame, engine, and floor, the Trabi body was made from a unique material. To keep costs low, the East German government used a material called Duroplast for the car’s body. Although it sounds like a great name for a bandage, this hard plastic is made by mixing formica (commonly used for dishes and countertops) with bakelite (used to produce old-fashioned rotary telephones) and fortifying it with cotton fibers left over from the textile industry.

While Duroplast may not sound like the safest material to protect you in an accident, the Trabant did surprisingly well in crash tests, performing better than some modern hatchbacks.

Sage Advice: Learn more about how to (manually) squirt windshield wiper fluid onto the Trabi’s windshield, see how sexy the glovebox is (not), discover the secret way to lock the vehicle, and more in this YouTube video.

7. The Steel Used in the Trabant was Imported from Russia

Importing steel from Russia was expensive, so the majority used in a Trabant was concentrated on the car’s frame, engine, and floorboard.

8. The Original 1950s Design Didn’t Change Much Over the Years

9. In Addition to Trabi, the Iconic Car had Several Other Nicknames

The inexpensively produced car made in Zwickau, Saxony, about 200 miles southwest of Berlin, was also known as the “plastic bomber” and “Saxon Porsche.” It’s also called a “spark plug with a roof.”

10. Filling Gas in a Trabant Takes a Special Talent

When it’s time to refuel a car, the biggest challenge most drivers face is determining which side of the car the fuel hatch is on. But gassing up a Trabant car is much more complicated. First, there’s no fuel hatch, which means that drivers have to lift the hood and pump gas directly into the tank. Thankfully, since there’s no fuel pump, the gas tank is accessibly located on top of the engine.

However, since Trabant cars are powered by a two-stroke, two-cylinder engine, drivers must mix a special oil with the gas and shake (not stir) the two liquids, ensuring they are as smooth as James Bond’s martini.

11. Trabants Have No Fuel Gauge

Once you’ve mastered the fine art of filling gas in a Trabi, you have the added challenge of keeping tabs on how much fuel is left in the tank. Why? Because unlike most vehicles, Trabants have no fuel gauge inside the car. So the only way to tell how much juice is left in the gas tank is by manually checking the fluid level with a dipstick – similar to how folks check oil levels in cars today.

And I’m not talking about frills like drink holders and cigarette lighters! In addition to having no fuel hatch and no fuel gauge, the Trabant 601 (a 1980s model) had no tachometer, no turn signal indicator, no headlight indicator, and no rear seat belts.

13. You Can Find the Cult Cars in Pop Culture

In addition to gracing the cover of U2’s Achtung Baby album, Trabis are also prominently featured at the East Side Gallery, a painted memorial along the longest remaining stretch of the Berlin Wall. The mini vehicle also played a leading role in Go, Trabi, Go, a comedy featuring an East German couple road tripping to Italy in their Trabi for vacation. And in case one Go, Trabi, Go movie isn’t enough, there’s a sequel – Go, Trabi, Go 2.

14. You Can Still Experience Trabant Cars in Europe and the US Today

Although it’s been nearly 30 years since the last Trabi car rolled off the production line in East Germany, you can still see Trabants in both Europe and the United States. Berlin is home to the Trabi Museum, an experience dedicated to the quirky Communist-era cars. And the Caen Memorial in France has a Trabi car on display next to a chunk of the Berlin Wall in its “The World after 1945” exhibit that depicts life in Europe during the Cold War.

Additionally, nearly 60,000 registered Trabis still drive on the roads today. From Berlin to Budapest, you can tour select cities in Eastern Europe via experiences like the Trabi Safari. And in the United States, don’t miss the annual Parade of Trabants hosted by the International Spy Museum in Washington, DC.

What is a Trabant?

Trabant is a series of small cars produced in East Germany from 1957 to 1990. Affectionately called Trabis, there were four different models of these small vehicles, the Trabant 500, Trabant 600, Trabant 601, and the Trabant 1.1.

What does Trabant mean?

The Trabant car’s name was derived from the German word drabant, which means “companion” or “fellow traveler.” It was inspired by Sputnik, the Soviet satellite that successfully orbited the earth in the year that the first Trabi was sold.

Where was the Trabant made?

Trabants were manufactured in Zwickau, Saxony, about 200 miles southwest of Berlin, by German car manufacturer VEB.

What were Trabant cars made from?

Trabants feature a plastic body around a one-piece steel frame known as a unibody. The bulk of the rest of the car, including the roof, hood, trunk, and doors, was  fashioned from a fiber-reinforced plastic similar to Formica, Bakelite, or fiberglass.

How much did a new Trabant car cost?

How to drive a Trabant

It’s not as simple as you might think! From its four-speed manual transmission to its confusing shift pattern, you can learn more about what it’s like to drive a Trabant here.

How fast can a Trabant go?

Trabants need more than 20 seconds to reach 60 miles per hour from a complete stop. And once you get pedal to the metal in one of these cult cars, you’ll find that it tops out at a maximum speed of 100 kilometers per hour (about 62 miles per hour).

Are Trabants legal in the USA?

The short answer is yes, but the longer answer is full of specifics. This guide to importing and buying Trabants provides a lot of those details.

Have You Seen, Driven, or Ridden in a Trabant Car?

Where did you see the Cold War-era car? What was it like to step inside the small, plastic vehicle? Are there any other Trabant fun facts you’d add to this list? Share your experiences in the comments section below. 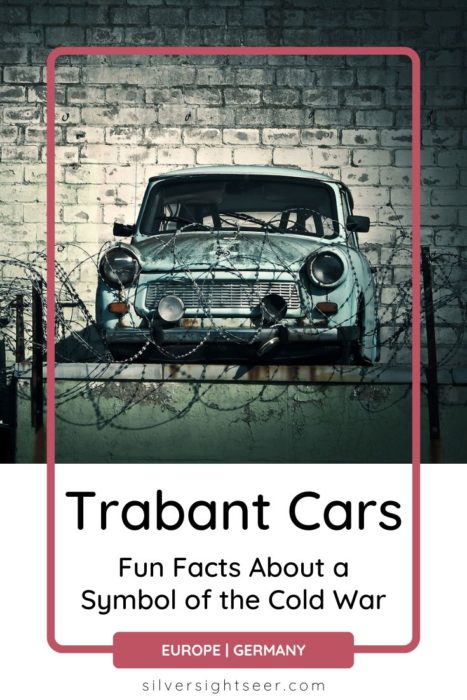 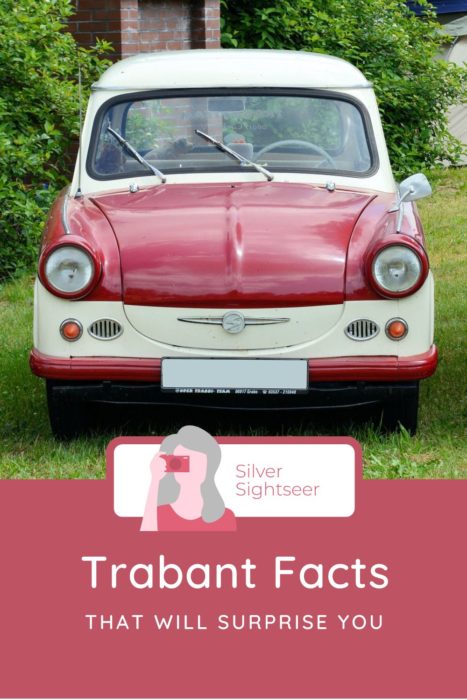 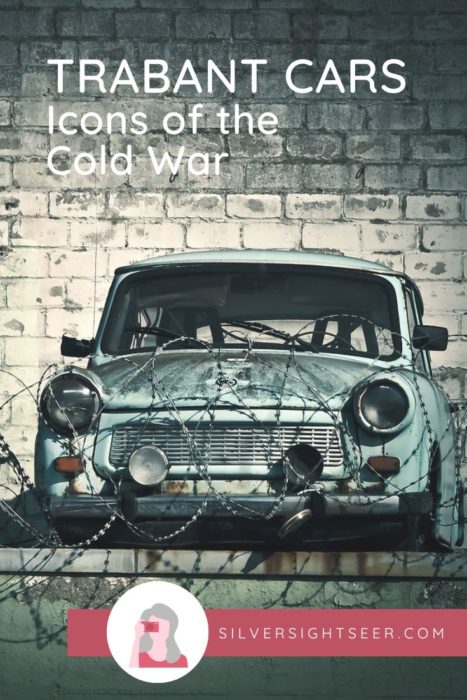 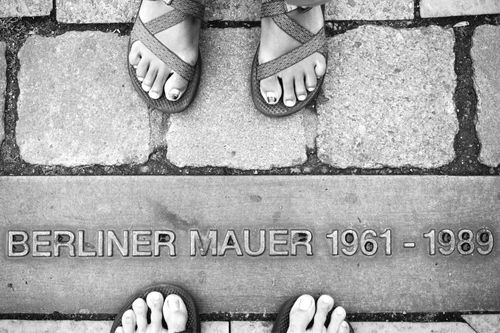 Berlin Wall. 7 ways to learn its history (and explore its current state) 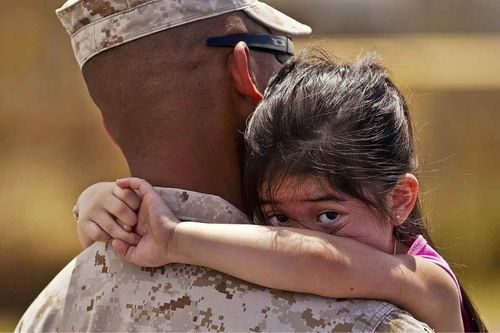 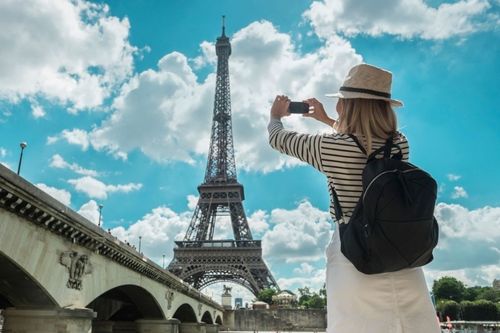 First Trip to Europe. 100+ things to know before you go.

While the fun facts and other content at Silver Sightseer is free, running this travel blog is not. That’s why you’ll find affiliate links lightly sprinkled throughout the site. There is no additional cost to you if you choose to make a purchase via one of these links, but I’ll earn a teeny tiny commission. Thank you for your support! (See the full disclosure page for more information.)